Enjoyed a wonderful Thanksgiving dinner with Andrew and his girlfriend and some neighbors. We smoked both a turkey breast and a brisket on the Traeger for around 8.5 hours. Delicious!

Bought a new 65" TCL (Chinese) 4k Roku HDTV for the basement on Black Friday. Andrew got the Samsung 50" this replaced for his new apartment.

Also got Eileen a new Fitbit Versa 2 and some other presents for ourselves. We aren't usually big Black Friday shoppers, but something set it off this year.

Andrew ended up moving to a new apartment.

Bruce and Eileen celebrated their 36th anniversary by crossing another state off Eileen's list: Hawaii! The trip started in September and ended in October. It was tempting to not go home.

Andrew began considering moving into a different apartment. His car was finally in need of more repairs than would be worth the money. So we gave him Eileen's 2015 Fusion hybrid and bought Eileen a 2019 model. 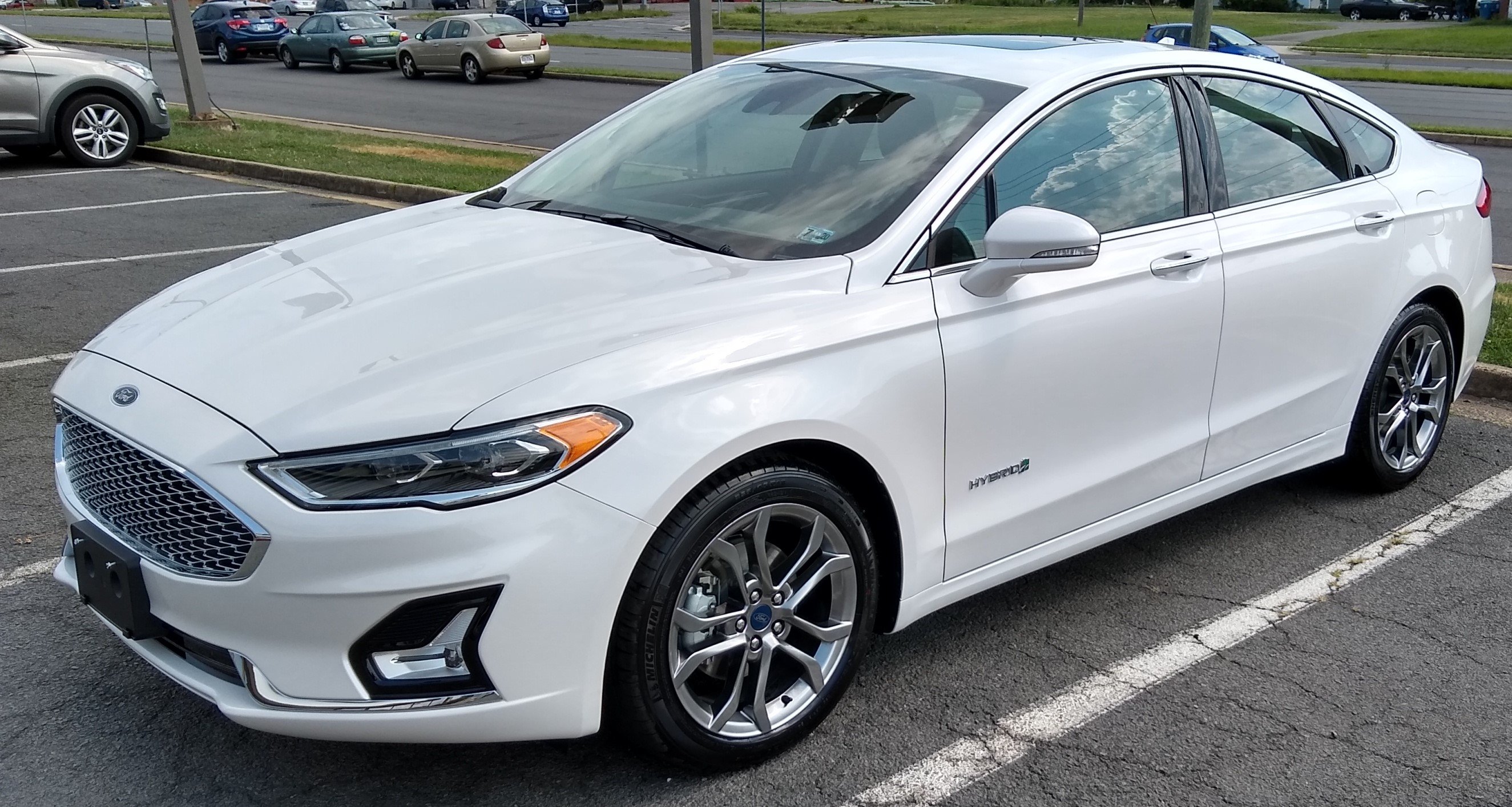 Bruce, Eileen and Andrew went to NYC for Independence Day where they spent some quality time with her cousin, Andrew  Bergman, and watched the fireworks from his apartment building's rooftop over the Hudson River with Manhattan in the background and the Brooklyn Bridge in the foreground. Spectacular!

Bruce did more research into e-bikes and discovered other types of propulsion. He decided to convert his old Giant hybrid into an e-bike with a mid-drive torque-sensing motor. Unlike his Surface 604 Colt, this one provided assistance based on how hard he pedaled, which forced him to work harder. He preferred this mode of propulsion and sold his Colt to a neighbor. 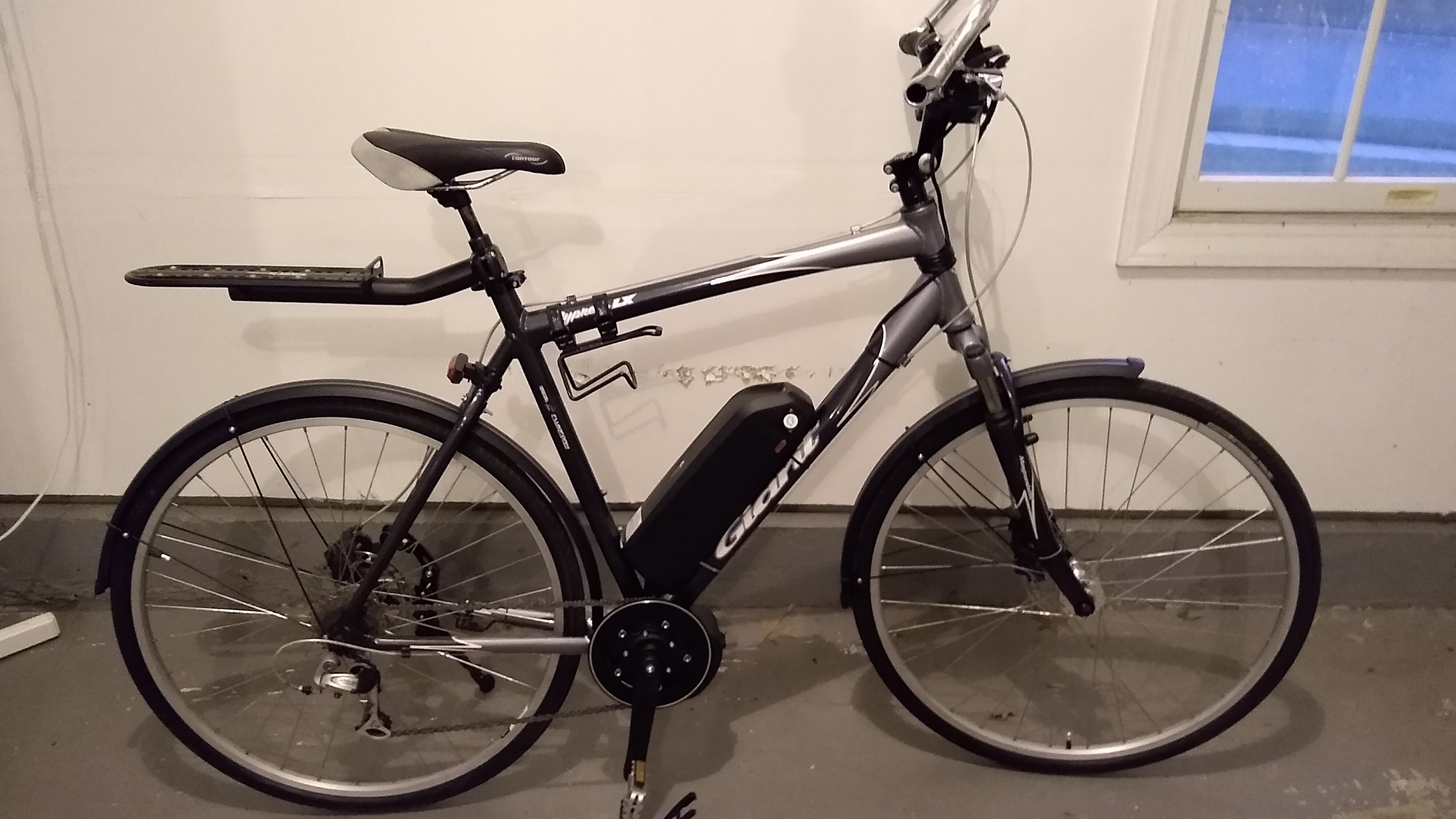 After a month of trying to ride his bicycle to work, Bruce decided he was pushing it too hard. Maybe he's getting too old or just went too long without doing it. Anyway, in June Bruce bought a Surface 604 Colt e-bike from a company in Vancouver, Canada, and began enjoying his commute rides to work without quite as much pain. This bike has a rear hub motor that provides up to 20 mph of assistance. Bruce kept it on level 2 of 5 so he still got a workout. 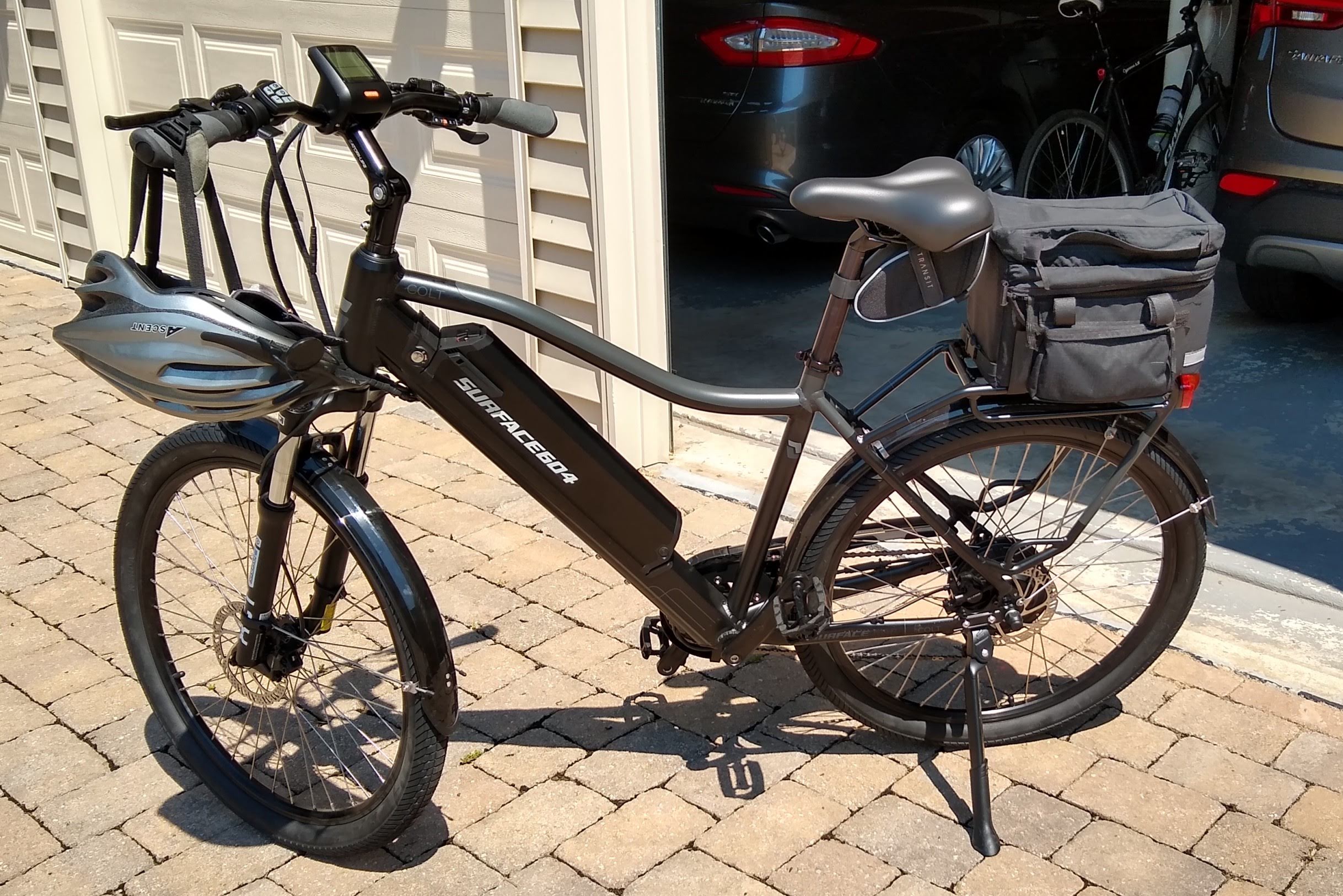 Andrew moved out this month and is sharing an apartment with someone he met at his new job.

As has become somewhat a tradition, we took Andrew out for his birthday dinner at his favorite Indian restaurant, Jaipur, in Fairfax. The only reason I mention this is because we got this great photo of him and he would soon be leaving our nest. 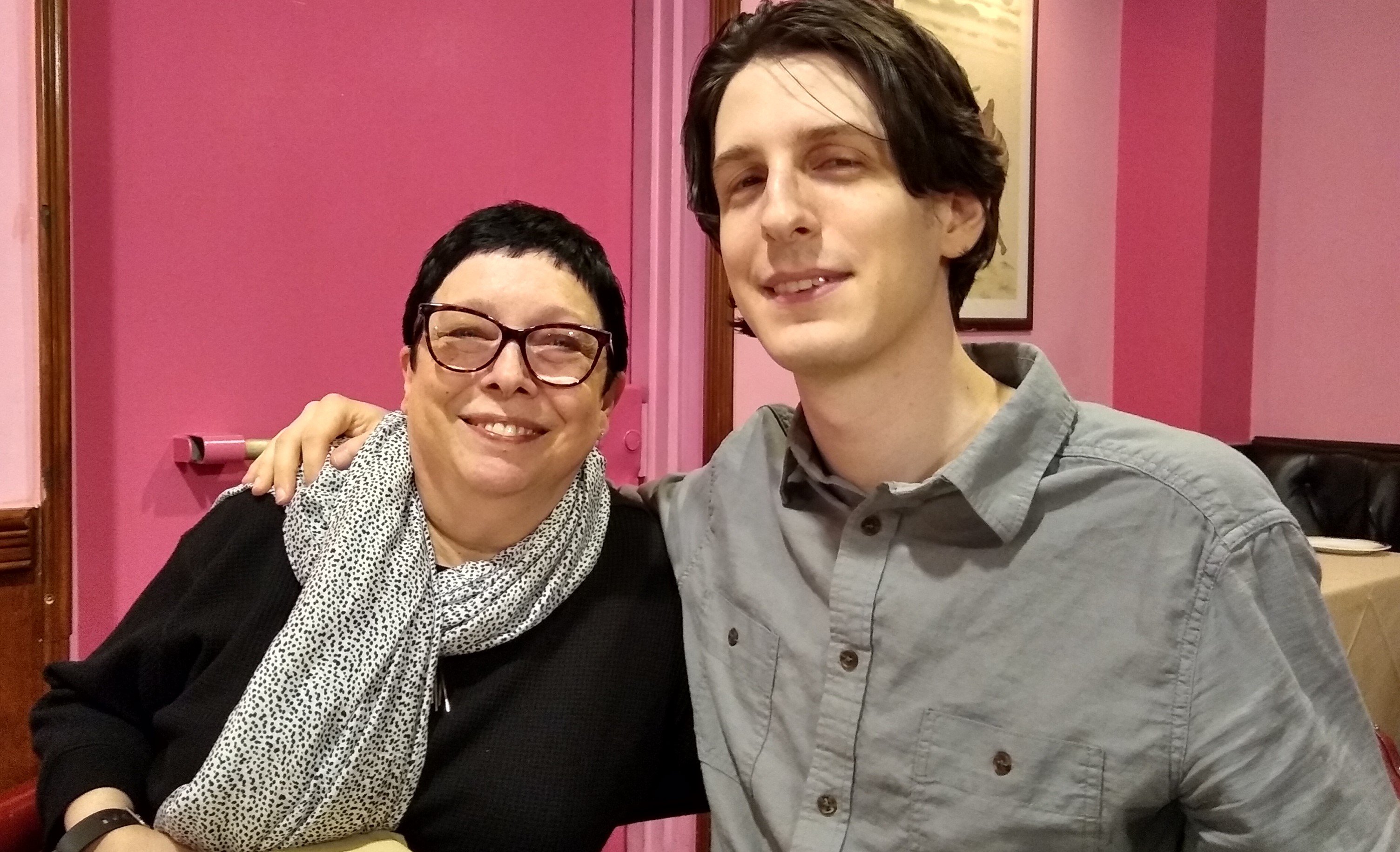 Bruce resumed riding his bicycle to work. It proved to be quite difficult since it had been about 9 years since he did that (motorcycles kind of quashed this exercise program). But he decided this would benefit his still-healing left hip.

Bruce stopped using a cane to get around. Which is not to say he's no longer in pain. He's trying to restore his posture and leaning on a cane doesn't help.

Rachel finally got her new wheelchair this month and it's awesome! Completely different technology not based on a huge block of foam but, rather, on a sculpted chair shaped to fit her body perfectly. We immediately noticed she is sitting more upright and not slouching to her left. 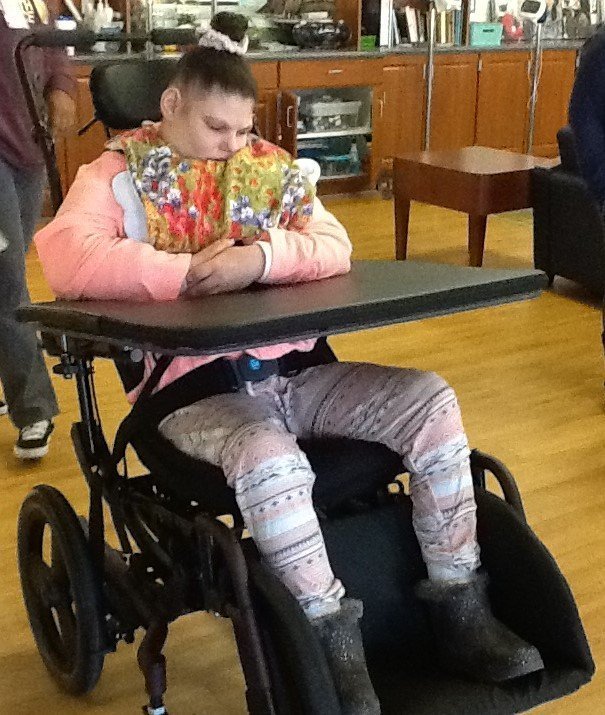 Bruce continued to recover from hip replacement surgery. It continued to be a struggle. He was still using a cane to get around. 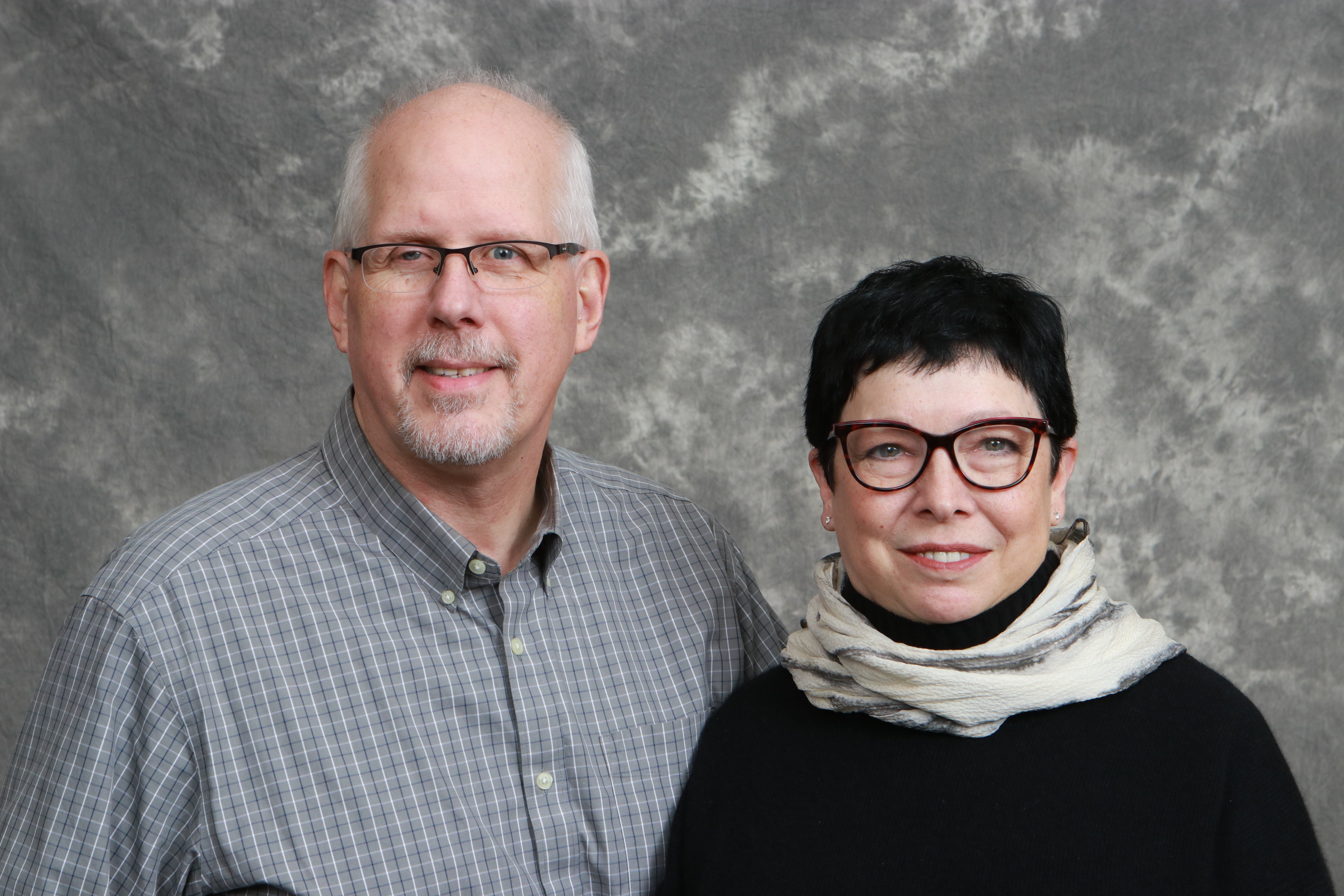 In early January, Bruce was struggling getting around using a two-wheeled walker. He eventually transitioned to a cane, which allowed him to get out of the house more. He worked from home as much as possible until he was able to tolerate sitting all day without elevating his legs.